The operator of the Nighttrain, Tobias Reckermann, and myself share not only an enthusiasm for Weird Fiction but also for Blues music. When Nighttrain author Erik R. Andara brought The Way Things End by Charles David (Tartarus Press 2019) to my attention, it was clear that this book deserved a place in the train compartment of this blog, as it also combines both passions. In addition to a review that is soon to follow, I took the opportunity to interview the author about his understanding of Blues music and its connection to speculative fiction.

Andreas Giesbert: Hello Charles, you are the author of The Way Things End, a weird fiction novel in which Blues music plays a big part. I would like to use the interview to talk with you about your book and Blues in speculative fiction. Before we get to the complicated issues: Please introduce yourself a bit and how you became a writer of speculative fiction.

Charles David: Hi Andreas. Thanks for this opportunity to talk about my work – something I actually find incredibly awkward to do. My influences in fiction are heavily centered around folks like Cormac McCarthy, Flannery O’Connor, Gabriel Garcia Marquez, Jorge Luis Borges, H.P. Lovecraft, Clark Ashton Smith, to name a few. I love the idea of cosmic horror, things that wrap us up and ruin us that we don’t understand. I like the idea of there being something so big and terrible out there that we have no way of defeating it, or even understanding it. In the face of that thing, all we do is cling to the tiny universes we know and love in order to pass the time and do the best we can. The Way Things Ends is really about this idea of something massive unknown to the characters, something moving toward them that influences their lives but they are unaware of the weight of that thing – only aware of the weight in their lives, their tiny universes. I think this is the thing I enjoy about this type of writing, the exploration of basic human things like feelings and fears that everyone shares, set in a world where things don’t always add up. There is this unexplained magical element that is the driver behind the direction of the characters but the characters are just normal folks trying to be in the world. 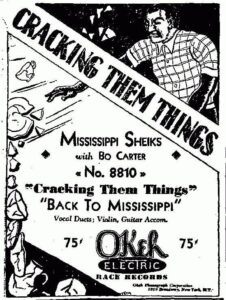 Blues can also be about shattering (song)

Andreas: As mentioned, Blues music plays a crucial role in your book. What is your personal relation to Blues music? What does Blues mean to you?

Charles: Blues is something that has always sort of hung in the background for me, like an ever present voice. The book is heavily influenced by Blues and music in general. The Pink Floyd song Echoes was the initial inspiration for Roosevelt’s Song. And of course Pink Floyd is heavily Blues influenced. Most of the characters in the book are based on songs. All of the characters actually. As for Blues specifically, I find the fear, the loneliness, the suffering, the unexpected that so often exists in the lyrics to be something that pulls me in. I think we all go through difficulties in life as we experience loneliness, loss, fear, etc. I think that the universal thing about Blues is that you don’t have to be from the past or the Southern U.S. or you don’t have to be Black to appreciate and love the music. You hear guys like Muddy Waters, Howlin’ Wolf, Robert Johnson, Buddy Guy, Stevie Ray Vaughn and you get this couple of minutes into the root of the human experience which is struggle. While the struggle often sucks, it is that thing that so often connects us. I guess Blues feels like a struggle to me.

Andreas: The Way Things End begins with a chapter on the fictional pre-war-blues musician Roosevelt Sands and is set in 1940. Did you have a real musician in mind that you models Roosevelt after? What was your inspiration?

Charles: Yeah. Robert Johnson and the myths around him were a big influence. The whole idea that Johnson can’t play worth a lick and disappears and comes back this master of the guitar. That he made a deal with the devil at the crossroads. I think it’s a great story. The idea of Roosevelt Sands encompasses this crossroads element and also uses the seventh son piece that plays on the old stories that the seventh son of a seventh son is this sort of mystical being. And I think Roosevelt literally proves that in the book. And you’re right, The Seventh Son is also a song by Willie Dixon. So, it’s really this mashup of artists and folklore elements along with stuff I heard growing up in the countryside of rural America. And the song Roosevelt Plays in the beginning of the book is based on Pink Floyd’s performance of Echoes at the amphitheatre in Pompeii.

Andreas: Roosevelt is only one character in the book. Most chapters take place in different times and places all over the world. Still, there is always that strange music around, that connects the chapters. How did the Blues influence your approach to the novel?

Charles: The book definitely focuses on the marginalized in our world. It focuses on Black people in the states, veterans returning from war, people who have essentially been orphaned due to war, people who live in isolation, people forgotten, people with terminal illness. Again this sort of comes back to the Blues being this universal thing that appeals to so many people because of the shared experience of struggle. I feel like at some point in all of our lives, we will suffer and experience loneliness, we will feel marginalized on some level. Maybe not everyone, but I think a lot of people feel this way sometimes. I think that is why I chose Blues in the book as opposed to something else. I wanted that spine of marginalisation to run through the span of stories and the characters. Everything is connected.

Blues music is often about loss and suffering (song)

Andreas: What leads me to another question about your novel. The chapters deal with a wide variety of characters and scenes that are only partly intertwined. My personal reading experience was that I had to connect the dots of the chapters by myself as opposed to being taken by the hand of a consistent plot. How did you conceptualize the novel? Did you always have all the personae and stories as a novel in mind?

Charles: I write scenes to start. Usually just something I really want to write about. One of the first scenes was Earn waking up and finding a dead whale in his backyard in Arizona. After I write out a scene I find interesting, something that was sort of begging to be written, I start to question the scene. Where did the whale come from? What is Earn’s reaction? Where is Earn in life? What annoys him? What does he want? That sort of stuff. I feel like I have an idea for a character but I get to know them by seeing how they interact within a scene. A lof of the character stuff may not make it into the book of course. I had a general idea for the premise of the book from the beginning but the characters really just evolved from my own experiences and the way the scenes grew. I didn’t want to do a sort of traditional plot as I wanted the reader to feel like they were discovering secrets on their own. One of the big elements of the book is connection and I wanted each element of the book, music, character interactions, the way the reader experienced the elements and discovered them, to reflect the idea that everything is connected.

Andreas: I would like to get back to my love for Blues music. As I am interested in the intersection – or should I call it crossroads – between Blues and literature: Have you been inspired by other novels that have the Blues as a topic, or can you recommend some Blues-centered works in the realm of speculative fiction, especially horror or weird fiction?

Charles: I have not been inspired by other novels that focus on Blues music just because I haven’t really read any. I do think books like Native Son by Richard Wright, Cloud Atlas by David Mitchell, and Norwegian Wood by Haruki Murakami are a few books that use or emulate or include music effectively and I think these books definitely had an influence on my own work – especially when I was writing The Way Things End.

Andreas: Bluesmusic is full of myths and elicits a very unique feeling. Still, opposed to other genres, Blues is not too much about story telling. Where do you see the intersections between Blues and literature? What is the unique perspective or topic that Blues can add to (speculative) fiction.

Charles: To me the main intersection is the creation of a universal tether that ties a reader or a listener to the work on an emotional level. I feel like when I have an emotional connection to a piece of music or a piece of writing, it is something that remains with me from that moment on, at least in some form. It adds to my experience as a person. It creates memory and over time maybe even nostalgia. I can remember the first time I listened to Muddy Waters and whenever I think of Muddy Waters I think of that experience. The same for literature. It shapes or reshapes the way I think or feel or phrase or express something, maybe on a very small level, but it becomes a part of me. I really love this idea and this experience. When I hear something that creates images and emotion, I am pulled into it. Blues seems to be incredibly effective at doing this, at least for me. I think a lot of the emotion of a Blues song is the context of the music in the space of the past juxtaposed with the space and lens I am consuming it in. There is a mythical, mystical element in that music for me that other music just doesn’t hold. It feels like crying out into the cosmos. There is a rawness to it, an unrefined element that should it be refined, would lose the gravity that it possesses. I love that idea. It was something I wanted to try and capture in The Way Things End.

Andreas: Thank you very much for your perspective. As I deeply enjoyed your debut novel. Can we expect more books by Charles David?

Charles: Thanks for kind words, Andreas. I’m glad you enjoyed the book. I am working on another novel that I hope to finish by next year. It’s about Appalachia and focuses on empathy and different levels of consciousness. It’s heavily influenced by some ideas from psychologist Julian Jaynes, specifically his ideas on the bicameral mind. I’m having a lot of fun writing it.

I appreciate the opportunity to share some thoughts. I enjoyed it. 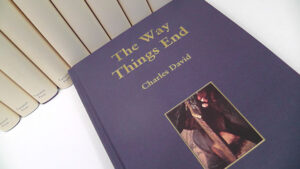 Images of the book are used with friendly permission by Tartarus Press. The other illustrations in this article are taken from historical advertisements. I would like to thank document records for collecting and sharing them on social media.